The Parish Council were working in conjunction with Cave Castle to bring the Village a weekend of Family entertainment. This is now cancelled due to the current situation, we have however arranged for red lamppost poppies to be placed on Church Street Lamposts, the Town Hall will be decorated in Red, White and Blue and the Chair to the Parish Council will be laying a wreath at the cenotaph on behalf of the Parish Council.

Many village streets around the country will be preparing their own decorations and front garden BBQ’s and picnics. It would be fabulous if we as a village can join in with this community spirit. The Clerk will arrange for photographs to be circulated. Thank you all in advance… Lyndsey

At 11am on Friday 8 May, BBC One will lead a poignant two-minute silence to mark the 75th anniversary of the end of the Second World War. This national moment of remembrance will pay tribute to heroes of the past and present.

VE Day 75: The Announcement Of Victory 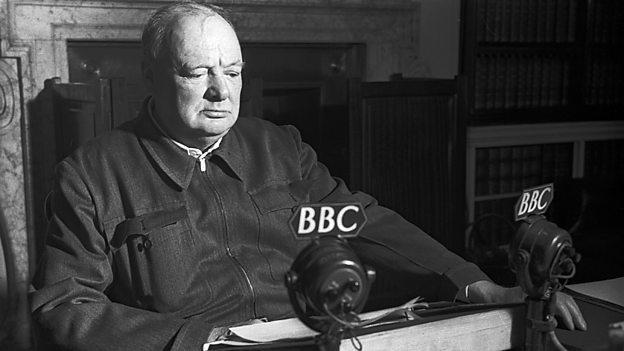 At 2.45pm BBC One will broadcast Sir Winston Churchill’s famous victory speech in which he addressed the nation to announce the end of the war in Europe, which he made from 10 Downing Street on 8 May 1945. Commemorating the 75th anniversary of Victory in Europe while in these unprecedented times of lockdown, will give everyone in the UK an opportunity to come together, albeit virtually, to pay tribute to the Second World War generation and show our gratitude to them for their service and sacrifice during the war. This pre-recorded event will be broadcast on BBC One on the afternoon of 8May and will be presented by Sophie Raworth.

At the heart of the broadcast will be a specially created film to celebrate and remember Sir Winston Churchill’s famous radio address that he made to the nation at 3pm on VE Day. This will be a poignant and emotional piece, reminding both those who were there and subsequent generations of this monumental day in our history. Personal testimony will be read by well-known public figures and celebrities, which recall the VE Day celebrations and the memories of the time. Throughout the event, stirring music from military performers will evoke the wartime spirit and the joy that music could bring even in the darkest of days. 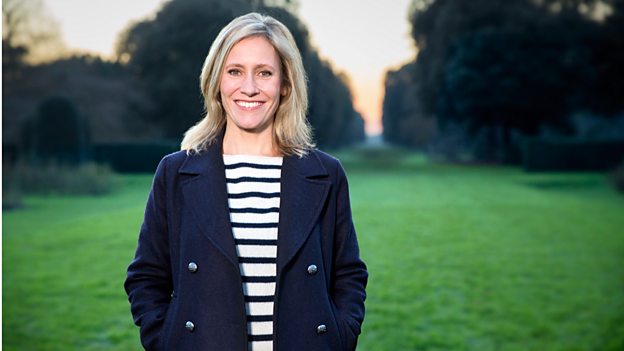 On BBC One at 8pm and in partnership with the Royal British Legion, Sophie Raworth will host a unique and unprecedented musical celebration for VE Day 75. VE Day 75: The People’s Celebration, will unite the nation in front of the television to salute our precious World War II generation.

Until the current Covid-19 crisis struck, there had been plans to stage celebratory events and street parties in every nation. Sadly, this has all had to be cancelled and the WWII generation, our golden generation, are at home in lockdown. We want to let them know that we have not forgotten the peace that they won for us, that we are thinking of them and that they are not alone, as well as cheering up the rest of the nation along the way.

Filmed in an iconic London location and featuring some of Britain’s biggest talent across the evening, stars will deliver unique versions of well-known songs from the 30’s and 40’s, we will hear much loved favourites such as Bluebirds Over The White Cliffs Of Dover and When The Lights Go On Again. The line-up includes Katherine Jenkins, Adrian Lester, Anton Du Beke, Shane Richie, Emma Barton, Beverley Knight, Helen George and Sharon D Clarke.

Throughout the show we will hear from the real stars of the night, the people who still remember that historic evening – Britain’s World War II generation. They will share their memories and photographs with us through specially recorded interviews produced in self-isolation on phones and FaceTime, their stories of pulling through the war and happiness on VE Day providing the narrative for the evening.

And at the very heart of the show we will hear a special message from HM The Queen who will speak at 9.00pm – the exact time her father spoke to the nation three quarters of a century ago.

In a truly amazing finale, we will see the nation unite for a very special rendition of We’ll Meet Again as across the UK we all give thanks to our veterans and remember our loved ones.

It may seem an impossible task in these exceptional times, but with some ingenious technology and plucky determination we can unite as a country to celebrate VE Day as never before and lift our sprits in honour of our greatest generation. 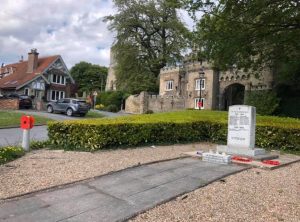 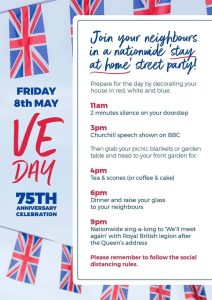 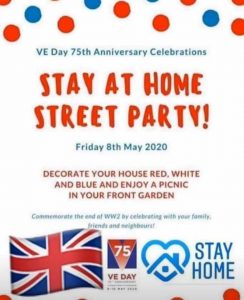 VE Day – 75th Anniversary – Commemorate the end of WW2 with your Friends, Family and Neighbours

Stay in your own Garden Picnic, BBQ or whatever you should wish

I am hoping you will all share your photos and videos on here for me to keep for the future and also I was thinking of doing a live feed from my car in the afternoon showing what if happening on each street. Not sure if you all know but South Cave all Saints Church has a zoom quiz planned for the evening commencing at 7:00p.m if you would like more information please visit the Church website.

The Parish Council have organised for a plaque to be installed at the Cenotaph, this will be as follows: 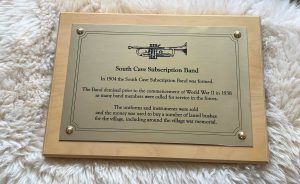 I will upload a video of the Chair to the Parish Council laying the Wreath at the Cenotaph, this will be completed on Thursday evening in order for the wreath to be in position for the weekend.

Can I take this opportunity to thank everybody for their efforts. I would also like to take this opportunity to thank all those people around our fantastic village who have offered help and assistance to others. I have a database of over 65 helpers all of whom are on call ready to assist with anything any resident within South Cave may need, wether this be, prescription collection or just a friendly chat, they are more then happy to help. I think this speaks volumes for how we have pulled together as a community at this very difficult time. There are also many other helpers and people arranging all kinds of assistance for others around the village, from making scrubs to shields being installed within our local shops and masks being made for donations to the NHS, these are just a few that I know of and Im positive there will be more around the village.

Can I remind you if you would like to offer help you can still register on the Parish Council Website at www.southcavepc.gov.uk or email me on clerk@southcavepc.gov.ukor call me on 07400030111, if you need assistance for any at all, please Also call me, my phones on 24/7 and I would be more then happy to hear from you.

Stay Safe and I look forward to see you your photographs

I have received a positive response and have a list of residents in the village who are willing to offer assistance to those who may need assistance with collecting goods, prescriptions etc.  Please contact myself at clerk@southcavepc.gov.uk or telephone 07400030111 for assistance.